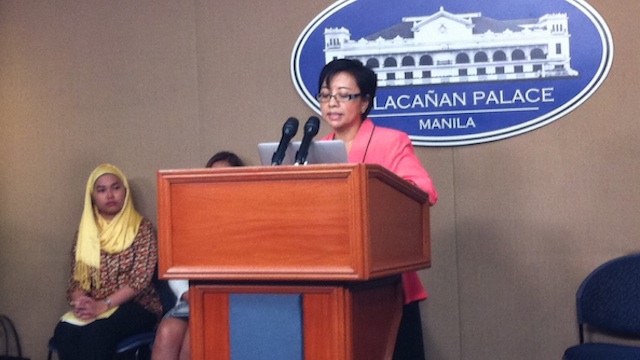 OPTIMISTIC. Despite two more annexes left for discussion, government peace panel head Miriam Colonel-Ferrer expresses optimism both sides will reach an agreement before the end of the year. Photo by Rappler

Two more annexes – on power sharing and on normalization – await discussion and approval to complete the comprehensive agreement. The government panel is almost certain these will be signed "within the year."

The Annex on Revenue Generation and Wealth Sharing, signed on July 13, came 5 months after the first document, the Annex on Transitional Arrangements and Modalities, was signed in February.

While the relief and contentment of the government peace panel upon the signing of the wealth-sharing annex was palpable on Monday, July 15, Presidential Adviser on the Peace Process Teresita "Ging" Deles reminded reporters there is much left to be done.

"In the coming months, expect already there will be rough patches," she said in a press briefing in Malacañang. "But remember this: we are committed to see this process through."

GPH peace panel chair Miriam Coronel-Ferrer described the negotiations as "a close call," but after 6 days of talks, including a 12-hour meeting, both parties finally came to an agreement and signed the contentious annex shortly before midnight Saturday.

Ferrer said the other annexes have been discussed simultaneously in talks, and said both sides "already have a good number of consensus points on the power-sharing annex as well as the normalization annex."

When asked which annex would likely be tackled ahead, she said "it will be a contest between the two annexes which one gets to the finish line first."

Sources have told Rappler, however, that both sides are expected to complete the power-sharing annex next since work on the annex has started June last year, at the same time as the wealth-sharing annex. It is considered to be on the advanced level as discussions are already tackled by the panel.

Ferrer would not give a specific time frame for the completion of the other two annexes but said "it is fair to assume the two annexes will be signed within the year."

She said both parties are looking to finish the negotiations as soon as possible in order to move on to the implementation of the agreement.

The goal, she said, is to finish everything within the Aquino administration, by 2016.

"The timetable is always a product of mutual deliberations. So that timetable really depends on both parties coming to terms with these difficult issues and as soon as we are able to do that, under pressure, just like last week, then certainly it will happen probably sooner than the pessimists expect," she said.

The parties are scheduled to meet again after the Ramadan.