Philippine troops arrest war refugees on suspicion they were rebels

From the Mindanao Examiner (Jun 25): Philippine troops arrest war refugees on suspicion they were rebels 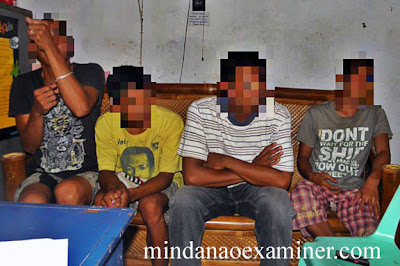 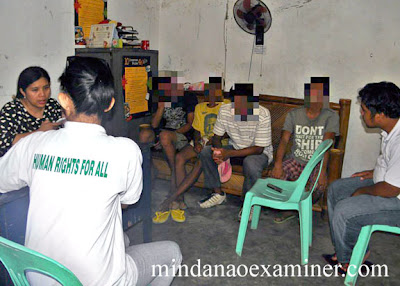 Photos released by the Mindanao Human Rights Action Center show the teenagers shortly after their release in Sultan Kudarat province in southern Philippines. One of the teenagers, left, demonstrate how he was holding the bamboo pole with a white flag when soldiers arrested him. They were among 8 war refugees arrested by the military on suspicion they were rebels. (Mindanao Examiner)

Philippine authorities have freed three teenagers who were arrested along with 5 men, mostly war refugees, on suspicion they were rebels.

The Mindanao Human Rights Action Center or MinHRAC reported on Tuesday that the teenagers had been released by the police late Monday in Sultan Kudarat province.

They were seized by army soldiers on June 23 while trying to get their belongings in the village of Kulasi where rebels and soldiers had clashed.

It said those arrested were villagers who fled the fighting, but the military said the group was carrying explosives, an accusation strongly denied by the victims.

Zainudin Malang, MinHRAC executive director, said those arrested were innocent civilians displaced by the fighting in the village and that they were taken by soldiers while on their way to briefly go to their homes to salvage their belongings.

“The men were asked by their families to take advantage of a lull in the shelling and get direly needed basic living supplies from their homes which they earlier evacuated to escape the shelling. The men carried with them a white flag to indicate they are not combatants,” he said.

Malang said the freed minors were reunited with their parents and guardians. He said they held off the announcement of the release of the minors on Monday hoping they can secure the freedom of the 5 others.

“The release of the 5 did not push through and they were brought to the fiscal's office this morning. The team accompanied them throughout the trip from the PNP Precinct in (President) Quirino (town) until they reached the Provincial Prosecutor's office in Isulan (town), Sultan Kudarat,” he said.

He said the arrest of the villagers is a serious human rights violation.

“We ask civil society groups to express their condemnation at yet again another violation of human rights in the Bangsamoro. Displacement is already a violation of one's rights. When displacement is followed by arbitrary arrest, then that is simply cruelty,” he said, adding, it was not the first time this has happened in the displaced communities of Mindanao and it would not be the last unless and until the people learn to express their disgust.

“As we have seen in the past, silence merely encourages impunity, only encourages perpetrators to continue violating our rights,” he said.

Malang said authorities have filed criminal charges against the 5 men for illegal possession of explosives. “The irony is this - per interview by my colleagues, they had in their hands not bombs, rifles, or grenades. What they had were bamboo poles at the end of which is a piece of white cloth to indicate they are not combatants.”

“They even approached the soldiers, under the mistaken impression that nothing would happen to them - "sibilyan po kami." The soldiers then assured them "Ganoon ba? Walang problema. Halika kayo, sama kayo sa amin para maalagaan kayo." or similarly comforting words. They went with the soldiers and it was only when they reached the battalion camp (of the 33rd Infantry Battalion) that they learned to their shock that they were being detained,” Malang said.

http://mindanaoexaminer.blogspot.com/2013/06/philippine-troops-arrest-war-refugees.html
Posted by Retired Analyst at 9:54 AM