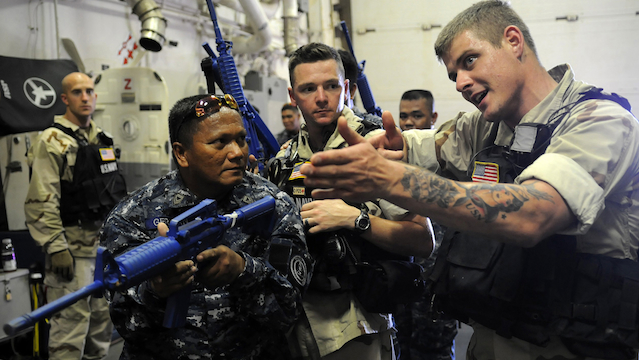 JOINT TRAINING. soldiers train a member of the Philippine Coast Guard during one of their joint exercises in . (Photo from Joint Special Operations Task Force-Philippines)

The two countries' officials will discuss boosting the number of visits of American troops, ships and aircraft while increasing US defence aid to the poorly-equipped Philippine military, Sorreta said.
The discussions will also look at more training for Filipino troops and increased help in humanitarian and disaster relief. A rotating force of 600 US Special Forces has been stationed in Mindanao since 2002 to help train local troops in how to combat Islamic militants.

The Philippines has sought to boost its ties with the United States in recent years following increasing aggressiveness by China in claiming virtually the entire South China Sea, even up to the coasts of its neighbours. In October, a Philippine official said a former US naval base in this country, facing the South China Sea could play a key role as a hub for American ships as Washington moves to strengthen its presence in the Asia-Pacific.

Tensions with China have increased since April following a standoff between Philippine and Chinese ships over South China Sea shoal which both claim as their territory.Sorreta said China should not be alarmed by the effort to improve Philippine-US ties. But, he stressed, "with our without the Americans, we will take our stand".

http://www.rappler.com/nation/17705-ph-eyes-greater-us-military-presence
Posted by Retired Analyst at 8:02 AM