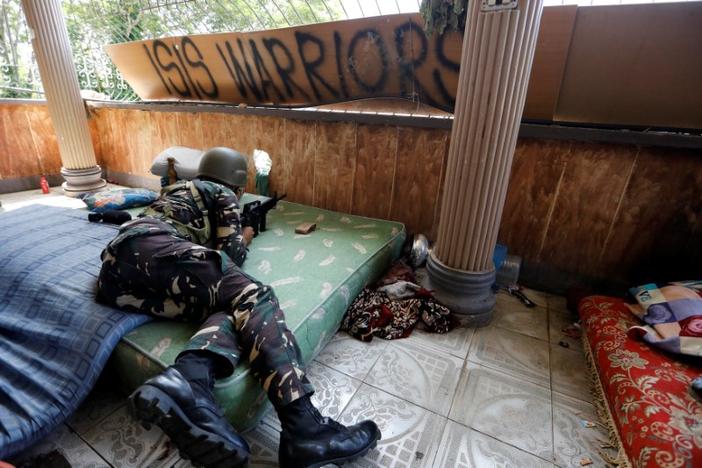 Sprawled on the boarded-up balcony of a two-storey house, the barrel of his rifle poked into a hole cut in the wood, the Philippine army sniper calls for quiet before taking his shot.

"Firing," he says evenly, before the .50 caliber shot rings out, sending tremors through the house. He was firing at a home less than a kilometer (a half mile) away, believed to be a stronghold of Islamist militants who have been holed up in Marawi City for over five weeks.

A spotter sat next to him, with his scope set into another hole. The two spoke quietly to each other as the sniper took three more shots across the Agus river into the militant-held commercial district of Marawi, now a battleground strewn with debris from ruined buildings. Scores of bodies are rotting in the area, and the stench mixes with the smell of gunpowder.

Thousands of soldiers are battling to retake the southern Philippine city, where militants loyal to Islamic State launched a lightning strike on May 23.

The southern Philippines has been marred for decades by insurgency and banditry. But the intensity of the battle in Marawi and the presence of foreign fighters from Indonesia, Malaysia, Yemen and Chechnya fighting alongside local militants has raised concerns that the region may be becoming a Southeast Asian hub for Islamic State as it loses ground in Iraq and Syria.

As troops poured in to contain the siege, few were expecting a slow, difficult and unfamiliar urban war.

"We are used to insurgencies... but a deployment of this magnitude, this kind of conflict is a challenge for our troops," said Lt Col Christopher Tampus, one of the officers commanding ground operations in Marawi.

He said progress in clearing the city has been hindered by militant fire and booby traps like gas tanks rigged with grenades.

After weeks of military airstrikes and shelling, Marawi, a lakeside city of around 200,000 is now a ghost town, the center of which has been reduced to charred rubble and hollow structures. Buildings in the military-controlled areas of the city are still standing but deserted after residents fled.

Authorities estimate around 100 to 120 fighters, some of them as young as 16 years, remain holed up in the commercial district of the city, down from around 500 at the beginning of the siege.

The fighters are holding around 100 hostages, according to the military, who have been forced to act as human shields, take up arms or become sex slaves.

Military aircraft drop bombs on the militant zone almost every day. From the outskirts of the city, mortar teams take aim at what they call "ground zero", the heart of the conflict.

"Mortars are designed to target people and smaller areas than the airstrikes." said mortar specialist Sgt. Jeffery Baybayan, as he jotted down coordinates that come crackling over a radio from an observer closer to the conflict area.

"Hitting targets accurately can be difficult and we're expending rounds without hitting targets. We are concerned about our own troops that are very close to the enemy area," he added, as the mortars exploded in the city, sending up plumes of thick black smoke.

During the day's battle, Tampus received reports that three civilians, trapped for weeks near the fighting, were trying to escape. Several soldiers responded to help rescue them - moving to the area in two lines along the sides of streets to avoid sniper fire.

Three civilians - two men and a woman using a walking stick - came out and sat by the side of the street once they were in the military zone.

"The bombs were so frequent coming from both sides," said Jose Locanas, a 53-year-old Christian man trapped with his wife and friend in his house. "We were caught in the middle."

Troops said they received word from their relatives that the three were trapped and managed to escort them out.

More than 400 people, including over 300 militants, 82 security forces and 44 civilians are known to have died in Marawi.

Some of the bodies of civilians were found decapitated and the military has warned the number of residents killed by rebel "atrocities" could rise sharply as troops retake more ground.

Every day, troops make announcements through loudspeakers for the militants to "surrender now or die". To the trapped civilians, they offer help to get out of the conflict area.

Authorities say they believe the militants are running out of supplies and ammunition, but they say there is no deadline to retake the city.

Tampus, the officer, said when troops reinforcements come into Marawi, they are initially apprehensive because of the high death toll.

"But once they are here, the discipline kicks in and they are focused," he said.

https://www.reuters.com/article/us-philippines-militants-battle-idUSKBN19M3GV
Posted by Retired Analyst at 12:20 AM