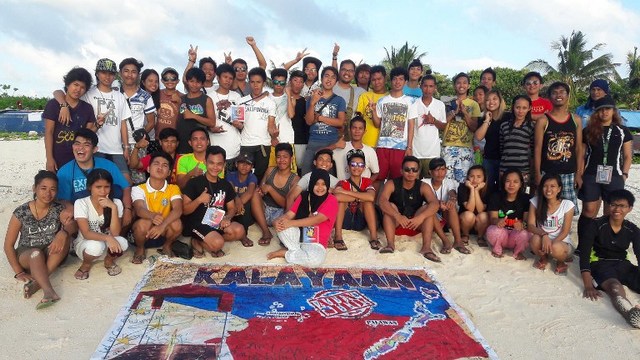 BACK HOME. This photo taken on December 26, 2015, provided by a group called Kalayaan Atin Ito (Kalayaan This Is Ours), shows Filipino youth posing for a photo at the island of Pag-asa, also known as Thitu, part of the disputed Spratly group of islands, in the South China Sea located off the coast of the western Philippines. Photo by Kalayaan Atin Ito/AFP

Nearly 50 young Filipinos returned Sunday, January 3, from a remote Philippine-held island in the South China Sea where they had staged a week-long protest against Beijing's claims in the disputed waterway.

The group arrived at Pag-asa island on December 26 as part of an effort to stir up popular opposition to China's claim to most of the contested sea, including Pag-asa, also known as Thitu.

The 47 youths have now returned to Palawan island in the Philippines, Joy Ban-eg, a coordinator of the group, confirmed.

Pag-asa island is part of the Spratlys chain in the South China Sea. China claims most of the sea but the Philippines, Brunei, Malaysia, Vietnam, and Taiwan have conflicting claims. (READ: The residents of Pag-asa: Life on a disputed island)

The end of the trip by the 47 Filipino youths coincided with a fresh flare-up between China and claimant Vietnam over the contested sea, as Hanoi accused the Asian giant of landing a plane on a disputed reef.

The Philippine Department of Foreign Affairs has said it will also file a protest over the incident.

The youth group, organized by a former navy officer, is called Kalayaan Atin Ito, which translates as "Kalayaan, This Is Ours."

"Kalayaan" is the name of a township established by the Philippines in the Spratlys to assert its territorial claim and is also the Filipino word for freedom.

Photographs of the group, posted on their Facebook page, showed the youths camping on the island and posing with patriotic banners.

Reacting to the trip, the Chinese foreign ministry had previously said it was "strongly dissatisfied with the actions and words of the Philippine side."

Despite having one of the weakest militaries in the region, the Philippines has been vocal in challenging China's claims to the South China Sea, a vital sealane and rich fishing ground which is also believed to hold vast mineral resources.

The Philippines has an international arbitration case now pending in the Hague where it is challenging China's territorial claims, though China has refused to recognize the proceedings.

http://www.rappler.com/nation/117814-kalayaan-youth-pagasa-island-return
Posted by Retired Analyst at 6:33 AM